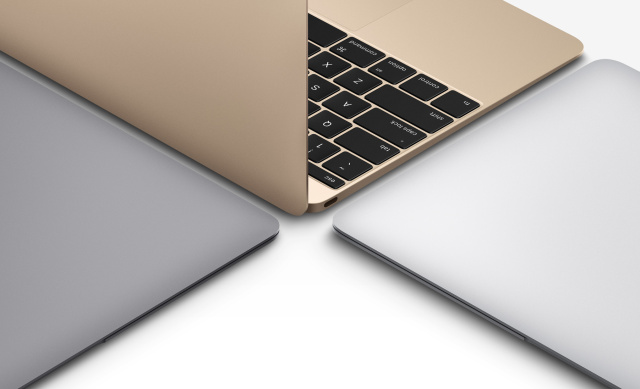 How else can you describe a computer with no expandability and virtually no ports which comes in a variety of colours?

First, the good news: the new MacBook has 8GB RAM as standard, and the SSD capacities start at a reasonable 256GB. This means that you’ll not need to worry about upgrading these essential features for at least two to three years, which is probably the planned life cycle of this machine.

It also has 12″ retina screen, and if it’s anything like the one on my retina iPad, it will be really, really good for the eyes. (I’m not being sarcastic here. The HD IPS panels Apple uses are among the best -if not the best- in the world.)

Finally it has an enhanced keyboard and trackpad, with the latter supporting some more touch functions than previous models.

Now for the bad news: this computer has no expandability. Want to add RAM? Want to upgrade in a few years to a higher-capacity SSD? Want to replace the battery? well, you can forget it. This computer is about as upgradable as an iPad.

But what’s worse is that it also has as many ports as an iPad: namely one. And that’s not one interface port plus a power port. That’s one port total. That’s right: Apple has finally created a computer so simple to use, it does not need ports! All you have to do is buy the (totally optional or course) dongles that add ports, to the tune of $80 for each port. And of course you can only use one dongle at a time.

Now if we look at this computer as an iPad with a keyboard, the lack of expandability and connectivity can be excused. (After all, people use their iPads for creative work, right? Right?) But for this computer to be considered an iPad, it would need a touch screen and an iOS-like user interface. Apple has failed to provide this. So this MacBook is meant to be considered as true computer, not an iPad.

Now, computers are meant to be creative tools. Which follows that they have to be practical for a number of jobs apart from accessing FaceBook, reading mail and web pages, and watching YouTube videos. After all, that’s what the iPad is for.

So what’s the new MacBook good for, apart from being used as large iPad with a keyboard?

At first glance, not much. You can perhaps use it as a lightweight travelling laptop, but it does not have any clear advantages over the current MacBook Air generation (apart from the retina screen) and it’s certainly not powerful enough or versatile enough to be used as a desktop replacement.

So who would need a laptop like this when you can get an iPad with virtually the same computing capabilities? I really have no answer, except perhaps one word: fashion.

Apple is now one of the most respected and valuable technology companies in the world. For those of us who remember the bad old days of the 90’s when Apple was a hair’s width away from bankrupcy, this is nothing short of a miracle. And the miracle man was of course Steve Jobs. What he understood more than anyone else in the industry, is that there are two kinds of customers in the world: when choosing for example, a car, one kind of customer will ask about the milage. But most will ask about the colour options.

So Apple was gradually driven to cater to the latter type of customer, who is more impressionable, is far easier to please, and -usually- has deeper pockets.

Those of us who used Macs and other Apple products to do creative work are a dwindling minority. Apple is now a company that creates technological fashion accessories, not creative tools. The new MacBook is a case in point. Granted that this is far more profitable, but it is also sad in a way.

P.S. A few years ago I jokingly suggested a Mac with no ports or expandability. I was certain this would never come to pass, because it was obviously ludicrous. Now as I read the specs of the new MacBook, I wonder about the other joke I read years ago in the depths of the web: an apple product consisting of a single shiny button that makes a pleasing tone when you press it, and sends $1 to Apple.