One of the main issues I have with The Force Awakens is how props (like the lightsaber training ball) and references (like the Mos Eisley cantina) from the original trilogy were practically shoehorned in the movie, without any real thought or consequence to the plot on the part of the director or the script writers. 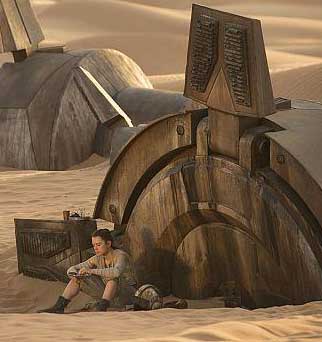 This scene tells us absolutely nothing about the plot and the characters not does it add any emotional depth.

There are many such moments, but one the most obvious was the scene where Rey is having lunch while wearing an X-Wing pilot’s helmet at the feet of an AT-AT. It has nothing to do with the plot, or the character, or anything. It’s just there to say to the audience: “Hey, remember that other Star Wars movie that was actually cooler than the movie you are currently watching? We also own that! So please, love us!” and the depressing thing is that it worked. The audience loved it.

There are also a few obvious merchandising moments that really take you out of the story. One is the character of Captain Phasma who is simply there to look cool and sell action figures. The character has no real reason for existing in the movie. The two instances she actually interacts with the movie plot (when she speaks to Finn in the first act and when she is captured by Finn and Rey in the third act) could be done just as well by any vanilla (get it?) stormtrooper.

These two characters are in the movie just to sell action figures.

Another obvious merchandising moment is when Finn has to fight his fellow stormtroopers using Anakins’ old lightsaber and conveniently comes across the only stormtrooper in the entire battlefield who apparently knows Finn by sight and happens to carry with him a cool-looking anti-lightsaber night stick. Although this gear and the reaction to Finn could be easily explained if the stormtrooper was Captain Phasma, it makes no sense for a regular stormtrooper.

For me J.J. Abrams has proved that he’s the next Michael Bay. Many people joke about Michael Bay movies and how they are just a montage of explosions. I think in a few years people are going to joke about J.J. Abrams movies in the same manner, but for different reasons. Like Michael Bay, J.J. Abrams  is very good at filming action sequences as long as you don’t look too closely at the details. But he’s also very weak when it comes to characters, plot, pacing and character drama:

In the reboot of Star Trek, J.J. Abrams did not actually have to create new characters, and the audience knew the crew of the Enterprise very well. Even in the second Star Trek movie, the main villain was an old Star Trek favorite. But in Force Awakens while the old characters work well, his own new characters are undercooked and two-dimensional (Yes, even Kylo Ren).

His movies are usually full of plot holes, convenient coincidences and time warping/shrinking issues. Watching a J.J. Abrams movie one feels like everything takes place in a single day, even when the script implies that days or weeks pass. And the plot coincidences pile up way beyond the point of plausibility, and break the suspension of disbelief of even the most ardent fan. 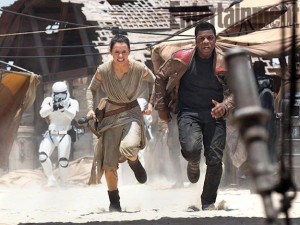 The Force Awakens is full of mindless action sequences like this chase scene. If you like the Fast & Furious movie series, you’re going to LOVE this movie.

But the worst offender is pacing. Apparently J.J. Abrams believes that every scene without fights, explosions or running is wasted screen time. The characters in his movies barely have time to talk coherently between action sequences. In the Force Awakens, one of the most notable offenders (and completely unnecessary from a plot standpoint) is the action sequence aboard Han Solo’s salvage vessel, which is conveniently boarded by not one, but two villains just when Solo (and therefore the script writers) would have to answer some awkward questions about Star Wars lore (specifically what happened in the 30-year gap between Return of the Jedi and Force Awakens).

Drama simply does not exist in a JJA movie. The destruction of an entire planet or the death of Han Solo left me completely unmoved. I vaguely felt the director wanted me to feel something, but the frantic pacing and the non-reaction of the other characters (see below on WTF moments) destroyed any sense of drama. I had the same issue with the Star Trek films directed by JJA. The man is incapable of directing emotional scenes.

You know a story is bad when you have to say WTF! while you’re watching it. The worst WFT moment in the entire movie was at the end, when Rey and Chewbacca return to the rebel base and Leia (who supposedly knows Han has died through her connection to the Force, but does not bother to ask anyone to confirm it like any normal person grieving for their spouse would) completely ignores Chewbacca and hugs Rey without saying a word. And Ray and Leia have just met for the first time ever in the entire film! And they don’t even talk. They just hug a strange person they just met. W…T…F…

Even if this is supposed to be an indication that (a) they actually met before or that (b) their sensitivity to the Force allowed them to communicate silently, this is done in a very ham-fisted way. 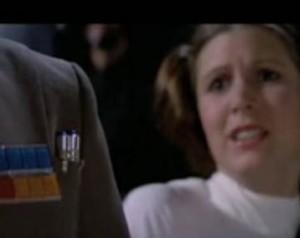 You can see the tragedy of Alderaan in Leia’s face. There’s no corresponding scene with any of the protagonists in the Force Awakens during the destruction of the planets sequence.

A lesser WTF moment was the firing of the canon on Starkiller base and the destruction of the planets, which completely ignores all the laws of physics. I know Star Wars is not exactly hard science fiction, but the whole concept of a “cannon” that harnesses a sun and then destroys planets hundreds if not thousands light years away with beams that can be seen from the surface of other planets and it does so instantaneously completely ignoring the speed of light, not to mention scale (there’s no way the canon beam could be visible from another solar system where the rebel base was) is simply too much for my suspension of disbelief.

And it strikes me how hollow and inconsequential the destruction of the planets was. Unlike A New Hope, where watching Leia’s reaction you actually get a sense of the tragedy and loss at the destruction of Alderaan, in The Force Awakens there was no sense of drama or scale. They might just as well have blown up party balloons.

The Force Awakens is ultimately a mediocre movie. It’s not as bad as the prequels, but then again few triple-A budget movies in general were as bad as the Star Wars prequels. For me it feels more like a reboot than a sequel to Return of the Jedi. Same story, but set in an alternative universe. And I think that as I watch the inevitable sequel next year, I will consider these new movies as part of the expanded Star Wars universe and not really canon.

I think that part of the reason that The Force Awakens failed to please me is that it is constructed and executed as part of a trilogy, or movie series (who knows how many more they will make? if Marvel is any indication, we will be deluged with Star Wars movies in the next few years) and not as a stand-alone movie.

In contrast, by the end of The Force Awakens I had more questions than answers. This might be good marketing, but it’s not good storytelling. A good story leaves you wanting more because you like what it offered. A bad story leaves you wanting more because it did not give you anything of substance. The Force Awakens falls more into the second category than the first.