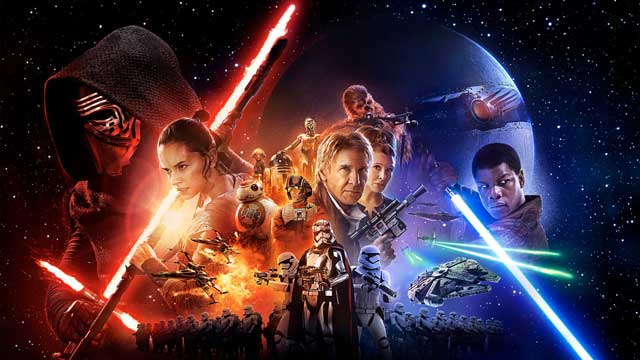 So I finally got to see the new Star Wars movie last night. When the end credits rolled, my feelings were definitely mixed. On the one hand, I was relieved it was not a total disaster like the prequels. There’s no awkwardly stilted acting, no Jar-Jar Binks-esque characters and (thank the Force!) no mention of midi-chlorians.

One the other hand, this was a movie directed by J.J. Abrams, the same person who butchered half a century of Star Trek lore and mutated it from a thoughtful Sci-Fi drama into a mindless action flick. And unfortunately, there are many JJA staples in the new Star Wars as well.

The trench run in the 1983 video game was actually more dramatic than the 2015 version.

First of all, The Force Awakens is basically a retelling of A New Hope. Yep. There’s a droid with vital information. There’s a planet-killing… thing. It’s not clear if it’s a moon, a planet or a space station disguised as a natural object. Not that it matters. It ends up being destroyed in the same old way, by a small fighter flying into a shaft. The difference is, there’s no drama or suspense about it this time around. It’s pretty much what the classic Star Wars trench run would be if you played it in the 1983 video game: no dialog, no emotional investment in the fate of the characters, no suspense at all. Just mindless action.

With the main plot basically copied and pasted from A New Hope, the Force Awakens could still be a great movie if it managed to create a new generation of compelling characters. And here’s where J.J. Abrams really drops the ball. The actors are doing their best, and are actually likable. But the pace of the story and the poor writing leave them feeling hollow and two-dimensional. 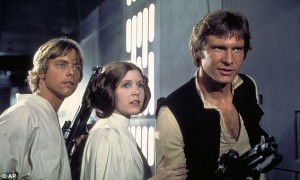 The original protagonists had well-defined personalities and motivations by the end of The New Hope.

With the main plot basically copied and pasted from A New Hope, the Force Awakens could still be a great movie if it managed to create a new generation of compelling characters. And here’s where J.J. Abrams really drops the ball. The actors are doing their best, and are actually likable. But the pace of the story and the poor writing leave them feeling hollow and two-dimensional.

In The New Hope by the end of the movie you knew all there was to know about the personalities of Luke, Han and Leia. You may not have known all the facts about them, but you definitely knew who they where.

By the end of The Force Awakens, the main characters are so under-developed that you are not even certain which are going to make it into the next movie. Hell, they are so forgettable that I can’t even remember most of their names without looking at the wikipedia article for the movie. 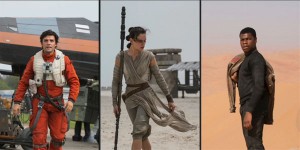 By the end of the Force Awakens, the new characters’ personalities, motivations and back stories are not at all clear.

There are supposed to be three main protagonists to replace Luke, Han and Leia. The Luke replacement is obviously Rey, a young woman that’s good at fixing machines and a badass in a fight. And she’s waiting for someone (it is implied that she’s waiting for her family) to return. And that’s pretty much all the information we are told about her in the entire movie. She has no discernible motivation or flaws that would make her relatable to the audience. Actress Daisy Ridley does the best she can to make the character likable, but she’s not given anything substantial to work with. (This is a recurring theme with all the new cast).

The Han Solo replacement is the most problematic of the three. I’m guessing it is supposed to be the resistance pilot Poe Dameron but it’s hard to tell. He’s killed off in the first act, only to miraculously appear alive in the third act, just in time when a recognizable character is needed to do a trench run. He has virtually no screen time at all. I actually knew more about Grand Moff Tarkin by the end of A New Hope that I know about Poe Dameron by the end of The Force Awakens. And both characters got about the same amount of screen time in their respective movies. 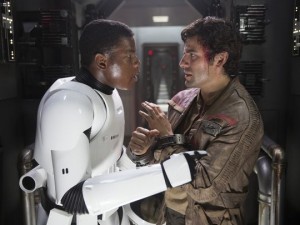 Finn has no realistic motivation for his actions in the entire movie.

As for the Leia replacement, this has to be the ex-stormtrooper FN-2187 “Finn”. However, his character is problematic because he seems to have no reasonable motivation for anything he does. There’s actually a dialog early in the movie in which the authors seem to acknowledge this: Finn rescues Poe, and Poe asks him why he did it. There’s an awkward pause, and then Finn replies “Because it is the right thing to do.” To which a sarcastic Poe comments “You need a pilot” and Finn shamefacedly admits “I need a pilot.” This was meant to be humorous, but it only serves to highlight the lack of realistic motivation for Finn’s actions. 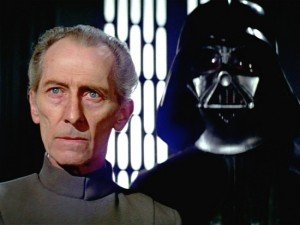 In The Force Awakens, all the main villains are played by young and relatively unknown actors. That’s not a bad thing by itself, but a great villain has to have presence, which the young actors lack the experience to project. You really need an over 50s actor/actress to get the proper gravitas.

There are three memorable main villains: the Darth Vader replacement Kylo Ren, the emperor replacement Supreme Leader Snoke and the Grand Moff Tarkin replacement General Hux. There’s also the lesser character Captain Phasma, who is basically there to sell action figures and contributes absolutely nothing to the plot. 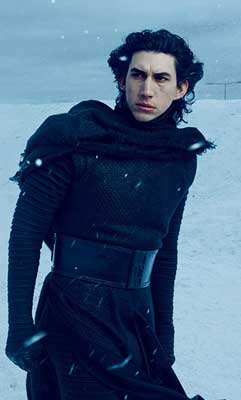 Kylo Ren is actually be best-developed character in The Force Awakens.

Of all the villains, the Darth Vader replacement Kylo Ren is actually the most developed character in the new movie. Still, he comes off more like a spoiled brat with temper tantrums than a truly menacing presence. To be fair, Vader was not actually menacing in the The New Hope either, where he was treated more like a super-henchman than a main villain. The iconic Vader we all know and love only appeared later in The Empire Strikes Back. So there’s hope for Kylo Ren.

Supreme Leader Snoke is another misfire. He’s supposed to be menacing, but feels too artificial. Also to be fair, the Emperor was just as under-developed in the original trilogy as Supreme Leader Snoke is in the Force Awakens. The choice of using a CGI character instead of an actual actor is in my opinion a bad one, because no CGI character can emote and project as well as a well-directed actor. (Although the prequels proved that a badly-directed actor can actually be worse than a CGI character.) Still, an older actor would have worked wonders with the role. Just imagine Ian McKellen or Patrick Stewart sitting on that throne.